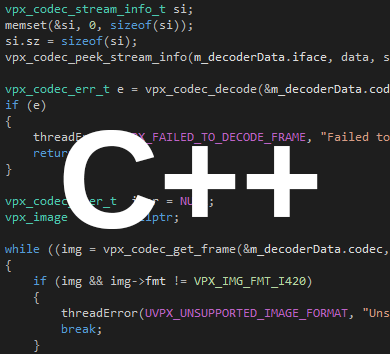 I’m releasing another of my free time projects – C++ library able to play WebM videos and supports decoding of the audio track.

I wrote about my Webm Video Player some time ago – this project is using SDL 2 to display the decoded YUV frame and plays the decoded PCM audio.

The library is distributed under BSD license and can be found on https://github.com/ssincak/webmPlayer

Implementing the library into Unity plugin

Some time ago, before I started to work on my video player, I was trying to play full-hd video in the Unity using their default built-in MovieTexture component (internally using Theora codec).

However, the video was choppy even at 50% quality set at Unity. So I opened the profiler and saw what was the problem:

So I decided to roll my own video plugin using some other codec than Theora. I went for VPX after weeks of spare time coding, I got some nice library that can play videos with wery nice performance.

I have written about that in my previous post (see here).

Recently, Unity has announced a new video player that will replace the old MovieTexture system. It brings several cool features and also significant performance boost. This player is available from Unity 5.6+, so when you want to play videos in the Unity smoothly, just download 5.6 and use the new system.